Christmas in Spain is glorious, a veritable feast for all the senses.

Of course, Spain is a remarkable country to visit at any time of the year. Its landscapes are varied and picturesque, its coastal waters sparkling and clear, its culture charming and delightful, its people warm and welcoming. But, as magnificent as it is throughout the year, there’s nothing that’s quite like Spain at Christmastime. To put things simply, the country and its people are at their best during the Christmas holidays.

Spain’s Christmas traditions are compelling and well worth exploring. Here’s a taste of what to expect if you visit this fascinating country at Christmastime.

First, it’s important to recognize that Christianity (specifically, Roman Catholicism) is tightly woven into the fabric of the Spanish culture. If Christianity plays an important role in your life, you’ll find the Christmas celebrations held throughout Spain unsurpassed by those in other countries. But even if that’s not a consideration, Spain’s Christmas traditions will give you a unique insight into the Spanish culture and people.

Spain’s Christmas holiday festivities last almost a month. They begin well in advance of Christmas Day, and they continue for many days afterward. The Christmas season “officially” begins December 8th (the Feast of the Immaculate Conception) and ends January 6th (the Feast of the Epiphany). As you can imagine, many Spaniards work long and hard preparing for such a lengthy holiday season.

Both deeply religious and exuberantly joyous, Christmas in Spain almost perfectly reflects the character of the country’s people and the national culture. Everywhere you look, you’ll see traditional Biblical stories, characters and scenes brought to life. 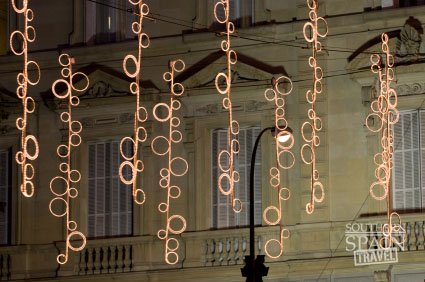 For example, elaborate nativity scenes (called “Nacimiento”) with beautifully carved figures aren’t just found in Spain’s cathedrals and churches – they’re an important part of the Christmas tradition in most Spanish homes. In the days leading up to Christmas, families often gather around their Nacimiento for festive singing and dancing. And, in Spain, the Three Wise Men bring presents for children, not the Santa Claus most of us have come to expect. Men dressed as the Three Wise Men are seen everywhere in Spain during the holiday season – thrilling children and bringing holiday cheer to orphanages, hospitals and other facilities.

You’ll also encounter a number of non-religious holiday sights. For example, most Spanish cities, towns and villages host at least one Christmas market where local vendors sell baskets of flowers and fruit, as well as wonderful hand-crafted Christmas gifts, candles, marzipan and other sweets. And many Spanish homes feature gaily decorated Christmas trees.

“Hogueras” (“bonfires”) is one particular Spanish Christmas tradition that you probably won’t see anywhere else, and it’s a must-see if you’re spending the holidays in Spain. Dating from pre-Christian, pagan times, Hogueras celebrates the winter solstice (the shortest day of the year) and the traditional beginning of winter. Observed primarily in Jaen and Granada, Hogueras features people jumping over bonfires to symbolically ward off illness and disease.

Another typically Spanish, secular Christmas in Spain tradition occurs on Christmas Eve. As darkness descends and the stars begin appearing in the sky, tiny oil lamps in the windows of Spanish homes are lighted, perhaps as a symbolic representation of the stars twinkling above. But at its heart, Christmas in Spain is a distinctly religious affair. The celebrations wind down as midnight approaches on Christmas Eve (“Nochebuena,” or “the Good Night”). Church bells start pealing, calling the faithful to attend midnight Mass (called “La Misa Del Gallo” - “the Mass of the Rooster”). In Spain, the midnight Christmas Eve Mass is typically a beautiful candlelight service.

In Spain, be ready for a late Christmas Eve dinner – by tradition, it’s not served until after midnight Mass. A Christmas turkey prepared with savory truffles is a typical, traditional family feast. And even though the meal is served so late, most Spaniards don’t go to bed for a long time afterward. Instead, many Spanish families sing hymns and carols for hours while seated around their home’s Christmas tree or crèche. Other Spaniards fill the streets for a night of singing and dancing to traditional castanets and guitars.

On Christmas Day, most Spaniards attend church services again, followed by holiday celebrations and feasts. “Swinging” is another Christmas tradition that’s unique to Spain. Swing sets are erected in various courtyards and plazas, and people swing the hours away while others sing and play music. 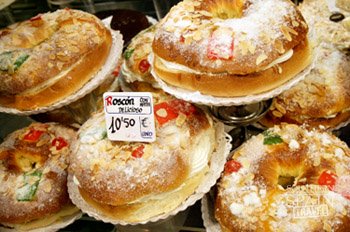 As in other countries, Christmas in Spain is a joyous, happy occasion. But here, the celebrations continue for many days beyond Christmas itself. The Biblical stories have the Three Wise Men bringing gifts to the baby Jesus on January 6th (Epiphany), and Spain commemorates this event in its own special way.

On Epiphany Eve (January 5th), eager young Spanish children fill their shoes with straw or grains to symbolically feed the Wise Men’s hungry camels. They then place their shoes on a windowsill or the doorstep of their home. As the legend goes, the Three Wise Men ride by that night and replace the straw in the children’s shoes with presents. The next morning (Epiphany), gleeful children awake to find their gifts. Later in the day, goodies like cakes and candies are passed out to children during street parades.

If you’re looking for a festive place to spend the Christmas holidays, you really ought to consider spending Christmas in Spain. In addition to enjoying the Christmas celebrations, you’ll get a strong dose of Spain’s fascinating culture.

Return from Christmas in Spain to Southern Spain Travel