There are an absolute ton of terrific Spanish beaches. In part, that’s because of southern Spain’s agreeable climate. But the country’s location on the Iberian Peninsula, surrounded by water on three sides, doesn’t hurt either. Spain shares a border with Portugal (on the west), France and Andorra (on the east), and the English territory of Gibraltar in the south.

When you add it all up, the Spanish coastline is over 5,000 miles long. Extensive sections feature beaches which all have different charms – some are rugged and dramatic, while others are friendly and welcoming. The warm waters of the Mediterranean bathe the eastern and southern shores of the country, the wild, wooly Atlantic Ocean lies to the northwest, and the Atlantic’s Bay of Biscay is on the north.

Here’s a little information on the areas where you can find some of the best Spanish beaches. Many of them are in southern Spain’s Andalucia region, so let’s start there.

In addition to being the home of some of Spain’s most beloved cities (Seville, Córdoba, Málaga, and Granada, for example), Andalusia plays host to multiple world-renowned Spanish beaches. The Andalusian climate is generally sunny and subtropical, making it perfect for sun-seekers and beach-goers.

The Costa del Sol may very well be one of the world’s most famous coastlines. Once just beautiful beaches lined by sleepy fishing villages, the area has evolved into a veritable playground for millions of visitors every year. Marbella is now a jet set hangout, so the area has plenty of glitz and nightlife.

Tens of thousands of British expatriates live on the Costa del Sol year-round, so if you don’t speak Spanish you won’t have much of a language problem. The number of resort properties, big hotels and apartments lining the beaches is almost overwhelming, but you’ll certainly have plenty of choices for your accommodations.

In addition to the warm sands of the beaches, you’ll find a wide array of watersports available on the Costa del Sol. Some fine championship golf courses have cropped up just inland, including the Club de Golf Valderrama – the host of the 1997 Ryder Cup. Plus, if you get bored with basking on the beach, boating, windsurfing, playing golf and so on, it’s easy to get to nearby Seville, Córdoba, Málaga or Granada and take in the sights. All in all, it’s hard to beat the Costa del Sol when it comes to Spanish beaches, although it’s often crowded. 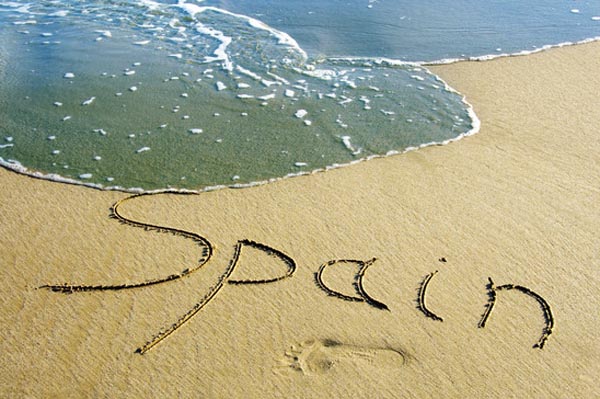 The Costa Tropical lies in the opposite direction, just east of the Costa del Sol. The Costa Tropical features picturesque little coves and crystal-clear waters that are warm and almost perfect for scuba diving. This isn’t an area where you’d want to go sunbathing, though – the beaches here tend to have coarse, almost rocky sand.

Of course, Andalusia doesn’t have the only Spanish beaches. Winter temperatures in northwestern Spain’s Galicia region are sometimes chilly. But the truly spectacular rock formations at the Playa de las Catedrales make it one of the most scenic of all Spanish beaches.

Also in the northwest, Asturias also has some iffy winter weather. However, the beaches there are generally considered to be the best in northern Spain. Playa del Silencio is a beautiful example of the windswept, rocky but scenic Asturian beaches.

La Concha, the beach in the Basque city of San Sebastián, is arguably one of the world’s most beautiful urban beaches. Surfing is one of its highlights.

Catalonia, in northeastern Spain, has more to offer than Barcelona and its high culture, architecture and blazing-hot nightlife. Sitges probably has the best Catalan beaches, but be advised that some are nudist and others have a gay orientation.

Finally, no discussion of Spanish beaches would be complete without mentioning the Costa Blanca in Spain’s Alicante region. It’s on eastern Spain’s Mediterranean coast, about halfway between Andalusia’s Málaga and Catalan Barcelona. Small towns and pleasant beaches line the Alicante coastline, and some of those beaches are favored by native Spaniards rather than travelers. They could be a good choice if you want an escape from crowds of tourists.

Spain has all types of beaches – sandy and perfect for sunbathing or partying, rocky and picturesque, windswept and perfect for watersports, calm and tranquil for rest and relaxation. Almost all of them are terrific. No matter what type of beach you prefer, you’ll find it somewhere along Spain’s 5,000-mile-long coastline. But for fun in the sun, you probably won’t beat Andalusia’s beautiful Spanish beaches.

The areas in southern Spain that are near the beach

Malaga - On the Mediterranean sea, the sandy del Sol beaches are one of the most relaxing beaches to go to.

Cadiz - One of the oldest continuesouly habited city in all of europe situated on the atlantic coast offers history and the beautiful beaches of Costa de la Luz.

Stay in these Paradors in Spain for unique and memorable time...

Parador of Nerja - Right on Burriana Beach, this parador has beautiful views