Curious about the Spanish flag? Spain is a proud country, and its storied history means its pride is well-deserved. At one time, Spain ruled much of the Western Hemisphere, but it also had colonies and possessions in Africa (Equatorial Guinea, Western Sahara and parts of Morocco), in the Atlantic Ocean (the Canary Islands) and in the Pacific (Guam, the Marianas Islands, the Caroline Islands and the Philippines, named after King Philip II of Spain). It was an empire unlike any other.

At one time in Spain’s history, the country could lay claim to the statement “the sun never sets on the empire” every bit as much as the British id during a later era. And the Spain's flag flew proudly over it all.

Spain didn’t actually become the Spain we know today until 1492, when the Moors were finally ejected from the Iberian Peninsula. Before then, the area that is now Spain was a loose association of various smaller kingdoms, including Castile, León and Aragon, among others. Unification came around the same time the Moors were booted out. Once the kingdoms united, the country needed a national flag. 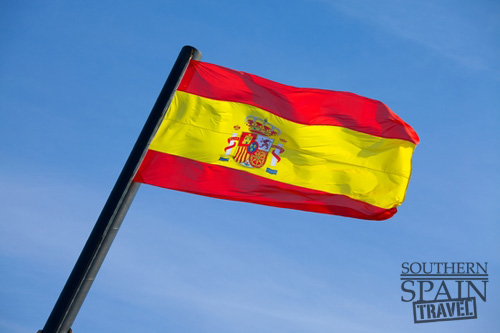 The Current Spanish Flag and its Meaning

The national coat of arms actually consists of elements from six historical coats of arms, all framed by two columns (one on each side) which represent the two promontories of the Pillars of Hercules (the ancient world’s name for the Straits of Gibraltar). Let’s look at the columns and their adornments first.

A crown sits atop each of these columns – an “Imperial Crown” is on the left column (King Charles I of Spain was also Emperor Charles V of the Holy Roman Empire) while a slightly different “Royal Crown” (signifying the monarchy) is on the right one. A red ribbon which is inscribed with the Latin phrase “plus ultra” wraps around the two columns. The phrase translates into “further beyond,” meaning beyond the Pillars of Hercules – a reference to Spain’s previous colonies and possessions. A single large crown at the center tops the entire coat of arms.

As mentioned above, the Spanish national coat of arms also uses elements of six historical coats of arms. They include a red lion rampant on a white background (symbolizing León); golden chains (representing Navarre); red and yellow vertical stripes for Aragon; a gold castle on a red background (symbolizing Castile); a fleur-de-lis for the House of Bourbon; and pomegranate flowers that symbolize Granada.

Spain’s current flag evolved out of a naval ensign that was used during the late 1700s. Since then it has seen several modifications, mostly consisting of alterations in the coat of arms on the left.

Where Will You See the Spanish Flag?

Like the flags of most other countries, Spain’s national flag traditionally flies over its government buildings and monuments. But you won’t see many of these flags at private homes, and Spaniards don’t normally put it on a bumper sticker or wave it during street parades.

Spain’s different from many other countries in regard to how its private citizens show their patriotism by displaying the flag. In Spain, patriotic displays by individuals and families seem to be reserved to local and regional flags and banners. The flag of Spain itself is not usually a part of these displays. The typical Spaniard’s first loyalty is to his or her barrio, then to the town or city, then to the region, and finally, to Spain itself. So, if you’re visiting Andalusia (for example), you’re likely to see the flag of Seville, Córdoba, Granada or Andalusia flying from private homes instead of Spain’s national flag.