Ham connoisseurs watch out – you’re in for a real treat!

There are two main types of Spanish ham: Jamón Serrano (Spanish hill or mountain ham) and the much more expensive and very different Jamón Ibérico (Iberian ham). Both are delicious, delectable and delightful mainstays of Spanish cuisine.

And so they should be, on all counts. Take Spanish ham, for example – it’s some of the finest in the world. It’s almost a national icon and it occupies a proud place on the menus of almost every restaurant in Spain, but it’s also a favorite dish in just about every Spanish home. Spaniards are passionate about their ham, viewing its creation as an art form to be executed precisely and its consumption as an honor to which they are entitled. Some of the traditional curing methods go all the way back to ancient, pre-Roman times.

Jamón Serrano and Jamón Ibérico are two distinct varieties of dry-cured ham, and both are world-renowned for their delicious, complex flavor. People in many parts of the world consider Spanish ham a gourmet delicacy, but in Spain it’s an everyday delight. So, ham connoisseurs watch out – you’re in for a real treat when you visit Spain. Here’s a quick overview of Jamón Serrano and Jamón Ibérico so you’ll know what to expect: 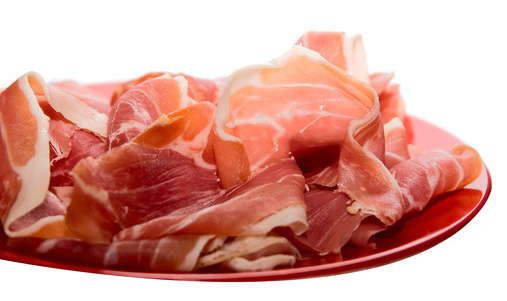 A staple in Spain, many traditional Spanish recipes (and many types of tapas) are based on Serrano ham. It features a complex, intense flavor and a texture that’s firmer than other types of cured hams. It takes at least a year of dry-curing (some producers cure it for as long as 18 months) in the mountains of Spain to produce Jamón Serrano, but this delicious ham is well worth the wait.

Typically, Spanish ham is served raw and very thinly sliced, accompanied by a glass of red wine and a fresh loaf of crusty bread, but some recipes use diced Serrano ham cooked in with veggies. Another popular option is the classic Spanish sandwich called the bocadillo – it consists of fresh crusty bread drizzled with olive oil, topped by thin slices of cheese and Serrano ham. Paella made with Jamón Serrano is always a hit, but many people enjoy their Serrano ham wrapped around a melon ball or as a topping on their salads. A specific breed of white pig (called the “Landrace”) is the source of most Serrano ham.

Jamón Serrano is Spain’s most popular type of dry-cured ham, and you’ll see it in almost every restaurant and tapas bar you visit. A favorite indulgence of the ancient Romans, Serrano ham isn’t expensive in Spain and other parts of continental Europe, but import duties raise its prices elsewhere in the world.

Iberian ham is very different than its Serrano cousin, although both are dry-cured Spanish ham products. Spain regulates this ham strictly, and a ham may only be called Jamón Ibérico if it’s made from black Iberian pigs or pigs that are at least ¾ black Iberian. These pigs predominantly live in southern and southwestern Spain.

The food that’s eaten by the pigs is responsible for much of the delicious flavor of Iberian ham. After they’re weaned, piglets are fed a mixture of grains for a few weeks; then they’re released into oak forests to free-feed on a diet of acorns, wild herbs and roots. As they mature, they’re fattened on acorns (the diet which produces the highest quality of Iberian ham), a mixture of grains and acorns (which results in a still-delicious but slightly lower quality Iberian ham), or only grains or commercial pig feed (without the acorns).

Jamón ibérico de bellota, the finest variety, is produced from free-range pigs that only eat acorns as they’re being readied for slaughter.

Jamón ibérico de recebo is a step down in quality. The pigs are kept in a pasture and fed a mixture of acorns and grains.

Jamón ibérico de cebo is made from pigs that are fed only grains or commercial pig feed. It’s the “lowest” quality Iberian ham but it’s still delicious.

The dry-curing process for Jamón Ibérico takes at least 12 months, but in some cases it takes up to 4 years. Ham produced from acorn-fed pigs (the first two varieties above) is prized for its nutty, complex, sweet but intense flavor. The texture is smooth and marbled with golden, melt-in-your-mouth fat. Iberian ham contains more fat than Serrano ham, making it richer and more savory.

You should sample some Jamón Ibérico while you’re visiting Spain - it’s not widely available anywhere else, and even if you do happen to find it, you’ll pay a steep price ($100 and up per pound for the finest type) unless you’re in Spain. It’s typically served in very thin slices, each of which is a masterpiece of flavor. Many consider it the finest, most flavorful ham in the world.

No wonder the Spanish are so proud!

The best sliced Jamon Serrano. (if you don't buy it sliced it comes on the thigh) 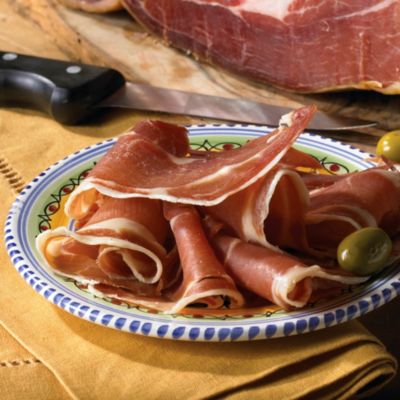 Or, this Spanish jamon sampler is great for yourself or to give as a unique and memorable gift! So fun and delicious. 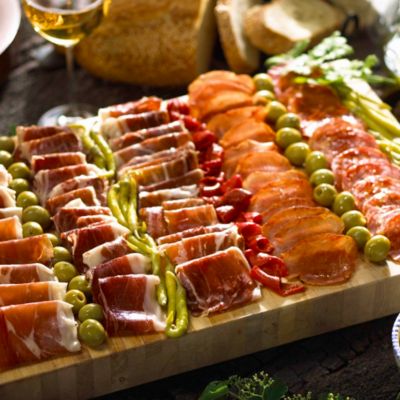